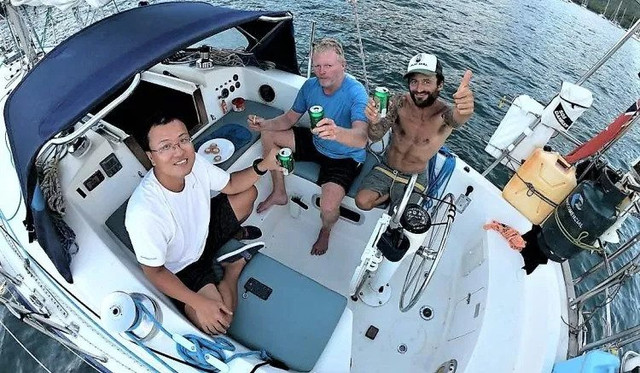 Galaxy III joined the annual the annual migration of sailors that make the crossing from the Americas to French Polynesia that have been known as ‘puddle jumpers’ for over 20 years http://www.pacificpuddlejump.com/about.html . The stretch between Galapogas Islands, Ecuador and Marquesas, French Polynesia is circa 3,000nm or 3 weeks and is the longest leg of the circumnavigation. With three on board, we’ll be stretching 300L water and rationing fuel to firstly, get through the doldrums and secondly, to keep the batteries charged.

After the new gearbox was installed on Galaxy, Cui (pronounced Trey) & I departed Panama on 22 March with a nice NE breeze that we hoped would get us far enough south from the Inter Tropical Convergence Zone to meet the SE trades. The north east breeze faded a couple of days early and the forecast was for 0-5kts all the way to Galapogas. Galaxy had enough fuel to motor half the distance, so it was looking like being a slow passage. Happily, 5-10kts breeze came in and combined with the Humboldt current, gave us around 6kts boat speed all the way to Galapagos.

The Humboldt current flows north along the coast of South America, bringing cool water to the Pacific Ocean – the sea temperature at the equator is around 24°C and this cool water creates the unique environment of the Galapagos Islands that supports rich biodiversity. http://www.discoveringgalapagos.org.uk/discover/geographical-processes/oceanography/humboldt-current/  The Humboldt current merges with the South Equatorial Current and keeps the water cool enough for the coral reefs in French Polynesia to also escape the high-water temperatures that cause bleaching.

Ecuador has strict biosecurity requirements for Galapagos and even though I had a diver clean the hull in Panama a week before we left, the hull is like a lawn in summer and we needed to scrub it again before arrival in Santa Cruz on Thursday afternoon, just before the Easter Long Weekend. After emailing ahead just about every document bar my HSC results & paying a dozen  different fees, we cleared in with six officials on board, including a diver to inspect the hull. Cui & I celebrated a successful first leg with Andres, who re-joined the crew after crossing the Atlantic on Galaxy last year.

The next morning, the bay was busy with black tip reef sharks, sea turtles and sea lions. Easter is low key on The Islands of Evolution – the church didn’t seem to have much on Good Friday, aside from two hardy souls handing out ‘Was life created?’ brochures on the ferry wharf – that would have to be one of the toughest gigs in Christianity. Public Holidays seem to be primarily observed by Government, for everyone else, its business as usual.
The clearing agent advised it would take three days after Easter to obtain a fuel permit, which requires approval from three government departments – so enjoy your time in Galapagos! This Gringo[1] had run out of patience and while my response was probably like water off a duck’s back, the no payment worked and we had the permit, fuel and water on board Saturday. Next was the cooking gas, which the agent triumphantly advised was impossible to obtain until next week. So, Andres disappeared into the depths of Santa Cruz and emerged with a 15kg gas bottle and the fittings to decant into the 4kg bottles on board.

In between victualling activities, Cui did the sightseeing on behalf of the crew while Andres & I surfed at Tortuga Bay. The waves were ordinary, though the white sand and aquamarine water made the 3km walk worthwhile. Pelicans sitting close by in the line-up, would launch themselves 3m-4m vertically out of the water, bank, then dive with surprising speed & power to catch fish – you could almost hear the David Attenborough commentary. After clearing out on Sunday morning, we weighed anchor and made way for French Polynesia. Adios amigos!

It was a slow start with light or no wind for the first four days as we made our way south to meet the SE trade winds. The GPS aerial on the autohelm gave up the ghost and we spent a day contemplating helming for the next 20 days – fortunately the autohelm could use GPS signal from the AIS and it took me a day of sweating in the aft cabin to figure this simple solution out & get it working.

The miles ticked over a 3 hour watch at a time &

Cui’s authentic Chinese cooking lifted the standard of meals considerably. What the fishing lacked in quantity, it made up for in quality and we landed a 1.4m shortbill sailfish and two nice mahi mahi. Sashimi and beer with each fish is a money can’t buy experience that has become a well-established tradition on Galaxy III.

A passage wouldn’t be complete without at least something going wrong and we managed to shred the spinnaker after hoisting it at the wrong angle to the wind. It wrapped around both the forestay and inner forestay in different directions – there was no lucky escape this time and both Andres & I climbed the mast to release the halyard and cut it free. Hanging on to the mast as it swings around is physically demanding and it’s not long before fatigue amplifies the risk of swinging out from the mast and crashing back into the rigging. Reflecting on what happened, I contemplated taking up basket weaving as I consoled myself with a few cold beers and ACDC on full volume.

Otherwise, most of the passage was as advertised, with consistent 15kt trade winds. After 21 days and 3,025nm Galaxy III arrived at Hiva Oa in the Marquesas Islands on the 22nd April. Welcome to French Polynesia. Hiva Oa harbour has a muddy look from black volcanic sand and is crowded with fellow puddle jumpers, some with fore and aft anchors, some without, just to keep everyone on their toes as the boats swing about, or not. Anchoring in Sydney Harbour on New Years Eve is easier.

Andres & Cui scouted the island for surf & returned with a car load of bananas, grapefruit & mangoes thanks to a generosity of a local farmer. The only surf is a small, onshore, black sand beach break, so the surfboards stayed on the boat.

Refuelling was again ‘an adventure’ – three days for an authorisation letter, another day for the service station to have diesel and then ferrying jerry cans in the dinghy between the dock and the boat! The fresh water is also untreated so we add chlorine tablets to the tanks, just in case. Victualling complete, we weigh anchor for the next leg of 600nm to Rangiroa Atoll in the Tuamotu Archipelago and some of the best scuba diving in the world.

[1] Gringo originated from the Vietnam war as “Green Go” referring to the US troops – the Mexicans ran with it and has since spread through South America with the Spanish adaptation to Gringo, broadly referring to English speaking people.