I settle into Shelter Bay Marina ( http://www.shelterbaymarina.com/ ) , which is literally located in the jungle on the other side of the harbour from Colon in Panama.  Crocodiles are frequently sighted cruising through the marina so no one jumps in to give their hull a scrub.  There’s also a US Military base abandoned when the Americans handed over the canal in 1999 – otherwise it’s a 30-90 minute bus or taxi, depending on the car ferry, to Colon.  Colon is a decayed and dangerous town, so it was only visited in daylight for provisions & the ATM – everyone wants to be paid in cash in Panama. 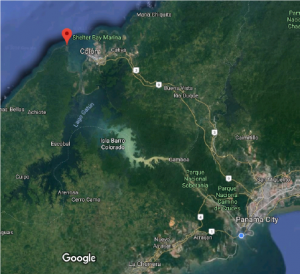 Shelter Bay has good facitlities and being the only alternative to anchoring in the harbour for a few weeks, it is priced accordingly.  Galaxy was officially measured and logged on for the canal transit in 16 days time – bugger, I was hoping for less of a stopover.  Fear not, Shelter Bay has a weekly schedule of activities to keep everyone entertained – Pot Luck BBQ at the Cruisers Palapa, Open Mike Night, Happy Hours etc etc – I met a young hitchiker who described it as being like an aged care facility and it did have a bit of that vibe about it.  So, I took the window of opportunity to visit my daughter, Ella, in Los Angeles.

I did my homework and learned there’s a visa waiver program for Australian nationals; The Visa Waiver Program (VWP) enables nationals of certain countries, including Australia, New Zealand, and the United Kingdom, to travel to the United States for tourism or business for stays of 90 days or less without obtaining a visa, if certain requirements are met. (https://au.usembassy.gov/visas/visa-waiver-program/ )  Seems straight forward; what could possibly go wrong?

I arrived at the airline check in counter after queuing for an hour to be asked “Can you show me your ESTA?” I replied, ‘what’s an esta?’ thinking it was something I learned in chemistry decades ago and went on to explain that Australians don’t need a visa.  Of course, I had missed the bit on the side panel of the website about ESTAs; All nationals and citizens of Visa Waiver Program (VWP) countries, including Australia, are required to obtain a travel authorization prior to initiating travel to the United States. This requirement commenced January 12, 2009. (My last visit to the US was in 2007). Authorization may be obtained online through the Electronic System for Travel Authorization (ESTA), an internet application administered by the Department of Homeland Security.  Shit, my flight departs in an hour and I can’t board without an ESTA – no pressure and somehow, I get it done on a mobile phone and the Department of Homeland Security now knows more about me than I did.

On arrival in LAX, I am directed to an electronic kiosk that repeats the ESTA questions, scans my passport, photographs and fingerprints me.  I then go to a kiosk with a human to repeat the process – questions, scans, photos & fingerprints.  The officer is wearing rubber gloves and noticing my troubled look, explained he simply wanted to avoid leaving ink stains on my passport.  ‘Thanks, I thought you were going to body search me.’ With a heartfelt “Welcome to America” I was on my way.  Not so fast, I approached another checkpoint thinking this one must be for the customs declaration – no, he also wants to see my passport and ask more questions.  By now I’m starting to doubt myself.  It all checks out and this time I’m through with another “Welcome to America” and still holding my customs declaration.

I hire a car, make my way to West Hollywood to see Ella & Hugh where they work at the Paramount Coffee Project ( http://www.pcpfx.com/ ) and refuel on an Australian menu & coffee.  If you know Hugh & Ella, then you also know Meryl.  Meryl is actually a human impersonating a Shelter Dog that will immigrate to Australia in due course.  Over the next few days Ella & I take Meryl on several walks through the Hollywood Hills and enjoy the vistas west to the Pacific Ocean and east to The Valley. 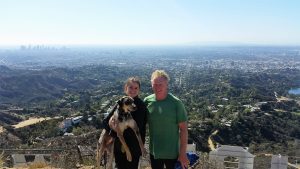 She has the boundless energy of a young hound and also suffers from separation anxiety, which requires marijuana medication.  Seriously.  At this point, I would like to make an apology to all the dogs I have had during my life, for, well, treating them like dogs and making them sleep outside.

I post a photo on Facebook with Ella & Meryl to be told by my Australian hairdresser I need a haircut – fair enough, its been a few months, so I do.  The Hollywood hairdresser marvels at my blond hair as I explain I’m on a circumnavigation and visiting my daughter.  He explains that people pay big money and still don’t get the same colour – he says I could go on a cruise with the money I’ve saved.  There you go, start out as a wranger, spend a year on a yacht and voila, I’m the envy of Hollywood!  I’m thinking, didn’t I just say I’m on a round the world cruise and decide we are not hearing each other – time to sit this one out.

Hugh & Ella are busy working in and on the business – the book keeping gets done at home and a power bill for over $200,000 gets opened!  Hugh’s priorities for the day suddenly change and impressively, he manages to get the decimal point moved to where it belongs in a few hours.  I would have put money on that taking weeks to unravel.  Building a business in a foreign country is a challenging gig and they have made great strides in a complex environment; building a customer base, a good team & supplier relationships.

America is a refreshing change after months of tropical lethargy. I enjoyed the cheerful enthusiasm that everyone in service roles shows and this seems to infuse the culture, or perhaps its visa versa.  It used to annoy me, this time I appreciated it.  While the US is too easy to bag from afar, it is impressive on many levels and I wouldn’t be as fast as the political & media commentary to write off its economic strength and capacity for innovation. 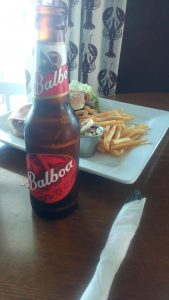