With my early arrival in Trinidad and Tobago, I had some time to take advantage of the excellent facilities at  Chaguaramas to get some work done on Galaxy III, ahead of spending some time with Lauren & Ella in Tobago.

It was lovely to see them both and brave of them to agree to spend the time with me on Galaxy III, considering they both get seasick.  Clearly, we didn’t fully think this through and both of them felt queasy at anchor on the first night.  Nevertheless, we enjoyed Tobago for a few days and circumnavigated the island by hire car, before returning to the Hyatt in Trinidad for the last two nights! 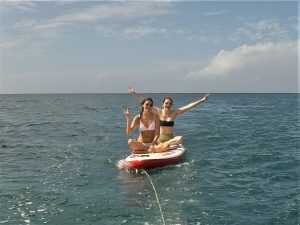 The Crews Inn marina is quite social and I met some fun people who were priming me for Carnival.  It seems single handed sailors have a reputation for being crazy, on the run or both, which caused a couple of people to comment that I seemed, er, normal.  “There’s still time” I replied, enjoying the puzzle created over where the line between humor and truth lay.

To the disbelief of locals, I departed Trinidad on the cusp of  Carnival so I could keep on schedule to meet Deanne in Tahiti in April.   The waiting time to transit the Panama canal is a known unknown – I had heard delays could be up to a month so I needed to keep moving.

Carnival dominates the culture of Trinidad & Tobago and runs for months with a series of competitive rounds  for mas (costumes), pan (steel bands) and soca (soul of calypso) that culminates with the main event in mid February; http://gotrinidadandtobagotourism.com/competitions-at-the-trinidad-carnival/ and www.ncctt.org/new/index.php/results-events/results.html

Making way for Panama on the 8th February, I avoid, as best I can, the pirates that prowl the narrow stretches of water that separate Trinidad from Venezuela, by weaving my way north through the gas platforms and fishing vessels, beyond the continental shelf.  I rationalized that any pirates that far out would be well equipped and looking for more booty than a 57 year old man in a 35 year old boat! (https://www.bloomberg.com/news/features/2018-01-30/venezuelan-pirates-rule-the-most-lawless-market-on-earth).  Just in case, I have a bottle of Johnie Walker Red on board to trade – I imagine any self respecting pirate would move on if that’s all that was offered. Or maybe insist we drink it together.

I make good time in the trade winds and equatorial current and pass Venezuela with the scotch in tact.   As Galaxy rounds the Dutch ABC Islands of Aruba, Bonaire and Curacao, I wonder if I could fit in a brief stopover and contemplate my strategy for the Colombian coastline, which has a nasty reputation for  30-40kt winds and 4-5m swells from January to March.  There are a few factors that come into play, with perhaps the most dramatic being The Andes, which gradually rise along the coast to reach a height of 5,775 m at the summit of Pico Cristobal Colon northeast of Cartagena. (http://www.noonsite.com/Countries/Colombia/sailing-advisory-north-west-coast-of-caribbean-colombia) 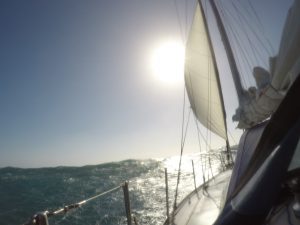 I run down the Colombian coast with a staysail as the wind steadily builds – there were a number of marinas to stop at on the way, though there didn’t seem to be any point, with no prospect of the winds easing before April.  Once the wind exceeds 35 kts it starts to get nasty and difficult to keep the boat at a safe speed, particularly with the swell rising to 5 m,  so I decide to run with bare poles and even then I was still doing 7 kts.  In heavy weather, its not the wind that gets you, it’s a wave a.k.a. a rogue wave.

In the early hours of the morning, a large wave with more north in it than usual, broke just as Galaxy rounded up – a crest on a 5m swell is a sizeable wave and it slammed side on into Galaxy, knocking it over flat with the mast in the water.  A seaworthy design, Galaxy III righted itself soon enough and was some way off being ‘turtled’ (https://en.wikipedia.org/wiki/Limit_of_positive_stability).  Nevertheless, the cabin was chaos and looked like a bomb had gone off, the dodger had been ripped off and was draped over the wheel and the binimi frame was creased and cracked with the solar panels at new angles.  It rattled me and luckily I escaped injury – it was my “not in Kansas anymore” moment. (https://en.wiktionary.org/wiki/not_in_Kansas_anymore)  I hove to for a while to clear the carnage before continuing and it took almost two days to complete the clean up.

Leroy the pumice stone joined the crew of Galaxy from Lord Howe Island a few years ago and has since sailed 20,000 nm, perched on the companionway, smiling back into the cockpit with infinite endurance & patience.  He was smart and a good listener, like his good friend Wilson the volleyball in Castaway. ( https://en.wikipedia.org/wiki/Cast_Away#Wilson_the_volleyball ).  Sadly, Leroy was lost overboard when Galaxy was knocked over – he would have floated for a while before sinking to the bottom of the Caribbean Sea.  Or maybe he floated to shore to start a new life in Colombia.

After 1,100 nm and possibly the toughest passage so far, I arrived at Panama Canal around 1 am on Friday 16th February and anchored inside the breakwater before proceeding to the Shelter Bay marina in daylight.