Thankfully the new starter motor arrived on the Saturday flight to St Helena –  customs clearance was around 4pm and after installing it, were on our way just after 5pm – I was on a mission to get going so we could arrive in Trinidad before the 25th January to meet Lauren & Ella. With a forecast for 15kt trade winds the whole way, we estimated 12 days to cover the 1,730nm to Fernando de Noronha, which meant arriving 29th December and spending Xmas at sea.  Aside from satellite communications, we would have avoided Xmas altogether!

While we didn’t really provision for Christmas, and we missed collecting Xmas cake from SV Perception before we departed St Helena, we did enjoy mahi-mahi freshly caught in the Atlantic Ocean, Windhoek draft, 2011 St Augustine red from Western Cape, bread freshly baked on board and for dessert, Polish cherries dipped in melted Swiss chocolate!

On the first day we hooked a large fish that was taking line rapidly, so I tightened the drag before the line ran out – the extra pressure straightened the hook and the ‘whatever it was’ just kept on going. At least we didn’t lose the line. It was day six before a fish was on again – this time we landed a nice Mahi-mahi around 10kg. The fillets will keep us fed for 5 days, before we need to fish again. I love the customary beer & sashimi as the first meal after a freshly caught fish. 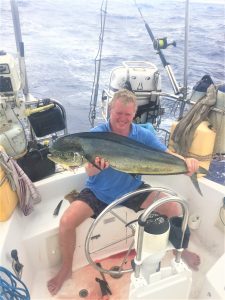 One of the morning jobs on Galaxy, is to clean the flying fish off the deck and out of the cockpit – there can be a dozen or more and one morning there were six in the cockpit alone.  Spare a thought for the hapless flying fish; there they are in the middle of ocean, taking flight to avoid predators and meeting their end, smacking into a passing yacht or occasionally, startled crew – one night a flying fish ricocheted off an open hatch in the V berth and landed on my face – you can imagine the expletives from literally being woken by a slap in the face by a wet fish.  The fish was flapping frantically, spreading scales over my face, the pillow and sheet – if he was going out, it was with the most damage possible on the way. What are the odds? – stay out here long enough, anything that can happen will happen.

We made good progress, covering 1,050nm in 7 days, with the genoa poled out.  It became warmer as we moved north, the ocean has morphed from grey to luminous indigo and the stars seemed to shine brighter – its surprising how many shooting stars you see every night.  I have found it impossible to even remotely capture a half decent photo of the night sky on a moving boat; it’s an image for the memory rather than a camera.

Sailing conditions were ideal, so we set the spinnaker for the first time and increased our average speed by a knot or so – doesn’t sound much, though it can add up & make a real difference to the passage time.  That said, when you’re rolling along at 6-7kts with a genoa, a spinnaker adds a lot more power to the boat which translates to more rolling & yawing and more work to sail straight – it’s fun for a while and then the path of least resistance takes over and we resume cruising with the genoa.

Andres & I usually take a turn about to cook a meal each day, which includes handmade pizza (Andres’ signature dish), tortillas, pasta, pumpkin risotto, dahl & fish; from sashimi to fish & chips to fish & rice to fish curry.  One beer or wine is usually enough unless its calm – so if you would like to cut down on alcohol, ocean sailing could be your thing. Lunch is usually leftovers or whatever is around, like cheese & tomato on toast.  We either forgot eggs this passage or they were hard to find in St Helena, so breakfast is a combination of fruit, pancakes with apple, toast or oats with raisins & honey.

Argentina continues to dominate Australia in chess and is now looking for a more competitive opponent.

At dawn on 28th December, after 11.5 days ( 6.4 kts average) with favourable trade winds, andres & I arrived at the Brazilian Island of Fernando de Noronha. By midday we had enjoyed a couple of Skol beers across from the port office  completed the arrival formalities with the Port Captain, Customs, and Police.  The vibe was laid back with the officials wearing shorts & thongs with police officers adding a gun holstered to their thighs to complete the look – kind of like Carnivale meets Dirty Harry. Lunch was washed down with a few more Skols overlooking the vista of the islands, bay and harbour. 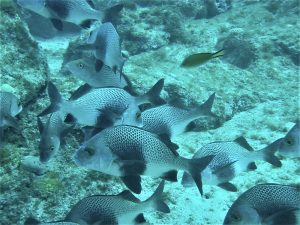 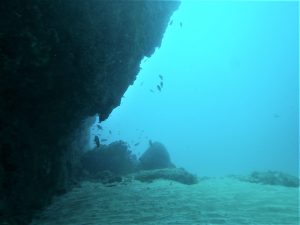 Andres achieved his goal to sail across the Atlantic Ocean and is returning home to Argentina to spend some time with his family – after a month at sea, homesick is better than seasick!  Now I’m using sign language to arrange fuel, water & provisions and have a few days to enjoy the diving and surfing on offer, before making way to Trinidad & Tobago.