“Maybe that is why you seem to live more vividly in Africa. The drama of life there is amplified by its constant proximity to death. That’s what infuses it with tension. It is the essence of its tragedy too. People love harder there. Love is the way that life forgets that it is terminal. Love is life’s alibi in the face of death.” – Peter Godwin, When a Crocodile Eats the Sun

For centuries Cape Town has been a stopover for passing ships and so it was for Galaxy III with repairs and maintenance; sails have been serviced, rigging repaired, deck painted, engine instruments relocated and the list goes on ….

In between working on Galaxy, I explored the coastline around Cape Town and surfed in bracing 13° Atlantic water.   I also donated Ben’s surfboard to a surf outreach program ( https://www.surfoutreach.co.za ) for disadvantaged African kids – it’s great to see how surfing can transform lives of young people otherwise trapped in a culture of gangs, drugs & crime. They are very talented surfers and it would be cool to see one of them on the pro circuit.

While I enjoyed sailing solo from the Maldives to Cape Town, I thought I’d see who was on findacrew.net for the 5,400 nm South Atlantic Crossing; Andres has signed on as crew from Cape Town to St Helena, Fernando de Noronha and Trinidad, where I’ll meet my daughters, Lauren & Ella, at the end of January.  Andres hails from Argentina with Italian heritage, is a keen surfer & travelled extensively, has worked as a lifeguard & paramedic and has lived on the northern beaches of Sydney for four years, so he is well versed in Australian culture!

Good friends, Mike & Tich Marsh, were visiting Namibia, from Scotland on their way to Australia, so I took the opportunity to meet up with them in Windhoek.

Steve & Georgie Hirst at Beau Gest Farm Stay ( https://www.ctcmarketing.co.za/namibia-beau-geste-accommodation )  treated us to some wonderful hospitality, including the delights of boerewors, biltong, bobotie, and a potjie pot.

and travelled across the desert to Walvis Bay where there is a famous left-hand wave known as Skeleton Bay.  Even though it was flat on the day we visited, getting there by 4WD was an adventure in itself and the extensive seal colonies nearby did cause me to reflect on what preys on seals.

A fun fact about WalvisBay, which is near the Tropic of Capricorn, is the temperature hovers around 20°C year-round, due to the cooling effect of the Atlantic Ocean.  There’s no regular rain and the few plants that inhabit the area survive on the sea mist.

I was fortunate to have Deanne join me for the last week and we enjoyed a wonderful time together;

from a braai with new friends to fine dining, from the Waterfront to Franschhoek wine estates, from Table Mountain & Cape Point to the beaches around Camps Bay 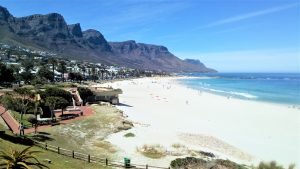 It has been almost 25 years since I was in South Africa, so naturally I was curious to see how the country had fared since the Freedom Election in 1994, with a new constitution[i] and equality under the law.  That the change occurred relatively peacefully is a remarkable achievement with both Nelson Mandela and FW de Klerk awarded the Nobel Peace Prize.

It’s a complex and tricky topic to wade into with a few paragraphs, nevertheless, here goes; In a generation, the population has grown from 40 million to over 55 million with an average age of just 25 years and these numbers overshadow much of the progress that has otherwise been made.  With unemployment at 28% and youth unemployment around 50%, day to day life for most Africans has more to do with economics than politics and remains a struggle, with 30% living on government aid[ii].

With the high level of publicity about the corruption of President, Jacob Zuma, as well as investigations by the FBI and the UK Financial Conduct Authority into the role of foreign companies[iii], it is easy to form a view that South Africa will be the last domino to fall and inexorably go the way of other African countries, like Zimbabwe[iv], with circa 90% unemployment and the country in ruins. Democracy in many parts of post-colonial Africa has provided the thinnest facade for brutal dictators to abuse their power, while the people who voted for them suffer and are repressed.  South Africans of all races deserve better and there is a sense of the country being at political and economic crossroads.

Whether upholding the rule of law & the constitution, a.k.a. ‘Western values’, will survive what has been termed ‘the African way[v]’ still has a way to play out.  The media and judiciary have so far held firm against ‘state capture’ and elections still function.  The Democratic Alliance (DA)[vi] has emerged as a challenger to the African National Congress, having won elections in three provinces and twenty-two municipalities, including the major cities of Cape Town, Port Elizabeth, Johannesburg and Pretoria.

The economy and infrastructure have, to the casual visitor, held up quite well – notwithstanding power and water shortages, which are not unknown in Australia either. Cape Town at least is a clean modern city with a healthy level of new development. However, national GDP growth is sluggish around 1% and the Rand continues to devalue[vii], so you don’t need to be an economist to see that double-digit growth of the economy is needed to transform the lives of most South Africans.  The economic success of any country is strongly linked to individual property rights[viii] and this has largely been ignored by the ruling African National Congress (ANC), aside seeking to gain political mileage from resuming agricultural land. Many Africans live on state-owned land & houses and this also feeds political patronage.  Providing land title would provide people with an asset, however modest, that then provides a foundation for economic growth.   The DA has issued thousands of land titles – millions more are needed and it is a step in the right direction.  So, politics in South Africa has an intensity that makes the issues focused on in Australia seem trivial, nevertheless South Africans retain a sense of humour and this ‘one of a kind’ ad is a good example; https://youtu.be/ViorVDgiiOg

[vii] bonus if you’re an Australian visitor, the $A has two to three times the buying power in south Africa.