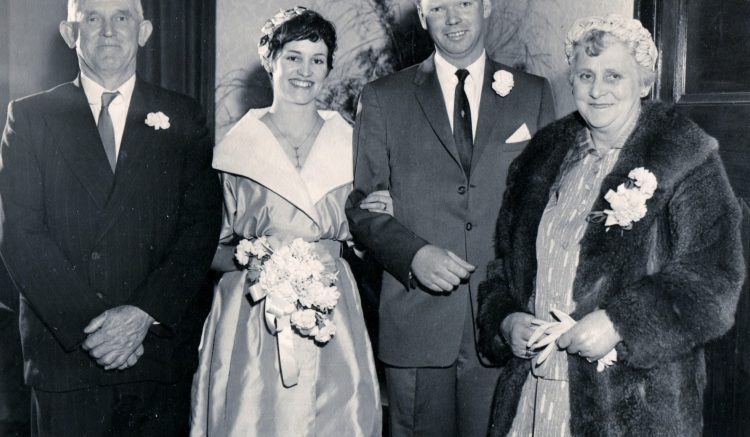 I returned to Australia after mum passed and am now back in Reunion to resume the next leg to Cape Town – I anticipate the 2,400nm will take circa three weeks, depending on how many SW fronts cross my route.

While mum’s death was expected, even hoped for to end years of suffering from Alzheimer’s, when it happened the emotion was still overwhelming. Pat’s life was so much more than the cruel disease that claimed it and I wanted to join family and friends to mourn the loss and celebrate her life.

The service was held in a garden setting at Kangy Angy, not far from where she grew up at Tumbi Umbi on the NSW Central Coast! Her brothers and sisters, nieces and nephews, her children, grandchildren and friends gave her a farewell I think she would have been happy with.

Family was everything to Pat and the service reflected this, with a song composed and performed by her granddaughter, Katie Canty, tributes from her sons, Chris & Greg, prayers led by her niece, Reverend Jenny Willsher, a reading from Ecclesiastes[i] by her younger brother, Reverend James Innes and releasing of white doves by her daughters, Cheryl & Sally.

My time in Australia also coincided with Deanne’s birthday and allowed me to catch up with a few friends and the kids, including Ella who had returned from LA.  Taking advantage of familiar surroundings, I undertook some maintenance, including new reading glasses, having a BCC removed from my back (the five stitches will stay in until Cape Town) and clearing up some gout with N.E.T.  Of course, I also obtained some parts for Galaxy III.

So there hasn’t been much time to enjoy Reunion, though I did fit in a surf before the trip home – there were six surfers in the water when I arrived at St Leu and I thought those odds were good enough to spread the risk of a shark attack.  It was also a sunny day and the water was clear, with no recent rain.  By mid-morning, there were twenty surfers out and it was then I noticed everyone, except me, was wearing an electronic ankle strap as a shark deterrent.  No one, it seems, surfs early or late in the day around here.  So, while the risk of sharks is taken seriously, surfers have to surf and the waves at St Leu are world class.

French is possibly the most beautiful sounding language on earth – my vocabulary is very limited and my accent worse, which is enough to cause any self-respecting French person to reply in English rather than decipher my butchered version.  The French accent is flamboyant and whenever I hear it, I find it difficult to avoid thinking about the French Taunter in Monty Python & The Holy Grail; https://www.youtube.com/watch?v=A8yjNbcKkNY

The forecast for my departure on Saturday is SE winds with gusts up to 30kts. It will be a brisk start and I’ll take the opportunity ahead of crossing the Mozambique channel, to practise heavy weather tactics with a 3rd reef in the main.

What gain have the workers from their toil?
I have seen the business that God has given to everyone to be busy with.
He has made everything suitable for its time; moreover, he has put a sense of past and future into their minds, yet they cannot find out what God has done from the beginning to the end.
I know that there is nothing better for them than to be happy and enjoy themselves as long as they live; moreover, it is God’s gift that all should eat and drink and take pleasure in all their toil.