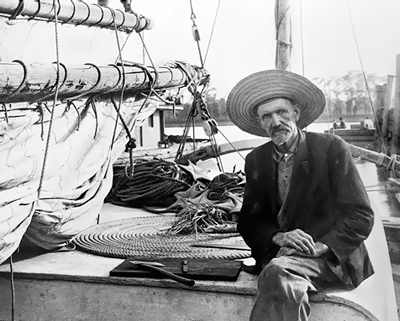 “To young men contemplating a voyage I would say go. The tales of rough usage are for the most part exaggerations, as also are the tales of sea danger. To face the elements is, to be sure, no light matter when the sea is in its grandest mood. You must then know the sea, and know that you know it, and not forget that it was made to be sailed over. ” Joshua Slocum

I had no idea who Joshua Slocum was until I recently won an award at Middle Harbour Yacht Club for my solo sail from Hobart to Sydney in February this year.  David James, who accepted the award on my behalf, enlightened me about Slocum’s fame with the news of the award.

Starting his circumnavigation in 1895, he was the first person to sail around the world solo, in a sloop around the same length as Galaxy.  OK great, so I bought the book on Audible to educate myself.

It is an enjoyable read (or listen) for its own sake, even more so for someone like me, undertaking my own circumnavigation.  In the context of seamanship & navigation, two things stood out for me.  Firstly, the ease with which he was able to set the boat up to self-steer and secondly his ability to navigate with his celestial knowledge, charts, taffrail log (for mileage) and a clock[ii].  Using the sun, moon and stars, he liked to keep it simple and usually didn’t bother with the complexity of a compass or sextant, unless it was to confirm his own dead reckoning! The simplicity is impressive and his story highlighted how dependent we are on electronics and in the context of ocean sailing, vulnerable.

However, he did run aground twice during his circumnavigation – once in South America and once on the Great Barrier Reef, so I’m in good company there.

My own vulnerability surfaced recently when there was a SeaTalk™ error on the autohelm while we were at Panaitan Island at the western end of Java. With some helpful phone support from Raymarine in Singapore, I was able to able to identify the short circuit and simplify the wiring.  Luckily, none of the transistors or computer chips were damaged, so I avoided the need to fly a technician out from Singapore.

Since departing Sydney, there has been quite a number of repairs required, most of which are listed in the table below.

Murphy’s Law comes to mind; If something can go wrong, it will go wrong.  It also highlights the importance of understanding the boat and how to fix it – sometimes it feels more like a floating workshop than a cruise.   Anyhoow, the repair items relating to sails, rigging, and the hull are mostly the result of avoidable human error.

Aside from the fish blocking the cooling water intake, that leaves four electrical faults, which represent the most common threat to the operation of the boat. Authors like Jones[iii] and Evans[iv] hold the view electrical faults are a certainty on an ocean passage, regardless of the age of the boat and responsible for more failed circumnavigation attempts than any other reason.

Until I learn celestial navigation, I’ll retain my dependence on GPS. If the electrical power on the boat fails, I have portable backup GPS devices (watch and satellite phone) to at least get me to the next port.  That leaves self-steering with sails, which works OK upwind, not so much downwind.  Failing that, we can heave-to when we need to rest from helming.  So, we’ll survive and get there eventually, albeit not as stylishly as Joshua Slocum.  Not yet anyway.

[ii] Midday local time, at maximum height of the sun, is referenced to Greenwich Mean Time to determine the longitude.  One hour difference from GMT is equivalent to 15⁰ longitude (360⁰ ÷ 24hrs = 15⁰/hour).

[iii] Tristan Jones, 1982. One hand for yourself, one for the ship. Macmillan Publishing Co.